Getting personal: the curse of Downing Street

Everyone appreciates the personal touch, especially when dealing with big organisations and government. Nowadays, ‘connecting’ and ‘engaging’ with the general public are the guiding principles of communications professionals everywhere.

And yet striking the right personal note is not as easy as you’d think. And regardless of which political party is in power, writing letters from Downing Street seems to be particularly fraught with difficulty.

Much was made by the media recently of the fact that Downing Street had been sending out letters signed by fictional staff with computer-generated names. This had been standard practice since 2005 after a member of staff from Number 10 was threatened outside her home. Clearly, it was assumed that people like to get word-processed letters with a personal, handwritten signature and the decision was made to use false names.

The truth only emerged after Labour MP Gerald Kaufamn, tried to contact a ‘Mrs E Adams’, who had signed a letter he had received. Staff at the Downing Street office had to admit she didn’t exist.

From now on, no more false names will be used by the Downing Street office. I wonder how letters from staff will be signed off in future?

Two years ago, beleaguered Prime Minister Gordon Brown was accused of being disrespectful to the grieving mother of a soldier who had been killed by a bomb in Afghanistan. What had he done? He had sent her a handwritten note to offer his personal condolences.

Unfortunately he had initially misspelled the son’s name and corrected it rather than starting afresh. Also, his handwriting was deemed a hastily-scrawled “insult”. In all, The Sun found 20 mistakes, including writing the letter “i” incorrectly 18 times. 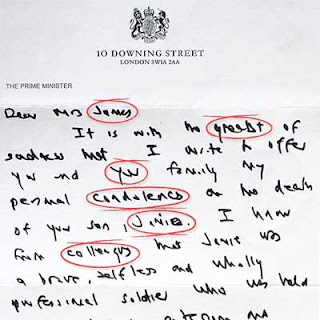 Gordon Brown was forced onto the defensive and had to apologise to the mother, Jacquie Janes (not James, as Gordon had written), by telephone.

Even allowing for Gordon Brown’s poor eyesight, it seems hard to believe that no-one at Number 10 intervened to suggest he should bin his first attempt and try again. As Robert Crampton wrote in The Times, “Gordon Brown screwed up by not screwing it up.”

Of course, this would never have happened to fictional President Bartlett, of US TV series The West Wing. Whenever the storyline included the death of a member of the armed forces, President Bartlett always made a personal call to the next of kin – a truly personal touch.

We non-fictional humans are so hard to please.