Brace yourself for ’11’ number plate madness

On the first of March the first 2011 vehicle registration plates will be released in the UK. These will include the year identifier 11, which is significant because, as one of the many websites devoted to selling personalised number plates points out:

the range of meaningful combinations is vast and diverse with some stunning name and word matches. What gives this series the edge over its sisters in the range is the fact that the number ’11’ can represent, to a very pleasing extent, the following letters / combinations:- LL, L, I, II, IL, LI, H, N and U.

I’ve never fully understood the desire for personalised or ‘vanity’ or ‘custom’ registration plates on a car. But I suppose you can never underestimate people’s desire to ‘express their individuality’ in any way they can.

Last December, the UK’s Driver and Vehicle Licensing Agency (DVLA) trousered a whopping £12.5 million in just one day auctioning off personalised number plates containing the number 11. The previous year had netted only £3.5 million in total.

A blog at comparenumberplates.co.uk/ reported:

To call it a number plate frenzy is an understatement. I’ve never known anything like it. 100s of people desperately calling every number plate company in the hope of grabbing the perfect private number plate.

Online sales opened on Tuesday 7th December, at 8.30am… and 1,000s of individuals bombarded the DVLA website to grab the number plates they were after.The best number plates were snapped up within seconds… quite literally. Every Singh number plate (such as AS11 NGH) disappeared, along with Smith (such as SM11 THR)… at just £1999 each, these were a total steal! It’s likely many will come back on the market at more than 10 times that.

It’s hard to believe that in these cash-strapped times people are prepared to fork out serious money for such a mundane item. Apparently, the minimum price for plates featuring letters relevant to the buyer, or those spelling words such as DULL DAY, sold in the DVLA’s online auction in December for prices ranging from £399 to £3,000.

DELL BOY, which has yet to be auctioned, could go for tens of thousands of pounds. Meanwhile, a Swindon Town FC supporter recently purchased the plates SW11 NDN for a mere £400, prompting the Swindon Advertiser to run the headline: “A wheely great plate.” 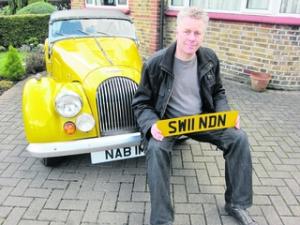 So what can we expect to see on British roads soon?

there will be gems such as BULL DOG, GALL OPS, WELL BAD and FALL GUY.  Or, if you happen to be an unfortunate motorcyclist, FALL OFF.

However, it will all be good, clean ‘fun’ as the Mail points out:

A team of official spoilsports is employed to weed out offensive, inadvisable or easily corruptible combinations before they are allowed to join Britain’s 34million registrations. Plates such as BULL ETS, MULL AHS and CALL GRL, therefore, will not be in anyone’s Christmas sack; nor will those that could be changed to look like POLICE, TALIBAN, A KILLER or FILTHY.
And don’t be misled into thinking the DVLA will miss one. Only rarely does it make a bit of a BALL SUP.

So there you go – you have been warned.