The reach of English is astounding.

English is the third largest language, by number of native speakers, after Mandarin Chinese and Spanish.

In 2005 between a quarter and a third of the world’s population spoke English. In China around 350 million people are currently learning English in their own free time. It’s estimated that by 2020, native English speakers may comprise only 15% of up to 2 billion people using or learning the language.

But the question is – what sort of English will they be speaking? English is used internationally for business, science, diplomacy and dominates the internet. Written English is likely to remain largely unaltered.

However, spoken English is already changing at a rapid rate. Apart from all the mother-tongue varieties (British English, American English, Australian English etc.) we already have pidgin versions such as Singlish (Singapore English), Engrish (in Japan) and Chinglish (in China) and many, many more – including Swenglish (used in Sweden – as anybody watching the Wallander series on BBC4 will have noticed).

The phenomenon of a global form of English used primarily by non-native speakers – Globish – cropped up on BBC Radio 4’s Start the Week recently, with Robert McCrum discussing his new book  ‘Globish: How the English language became the world’s language’.

Globish is a much-simplified sub-set of English based on about 1,500 words (the OED lists more than 600,000) with simple grammar and no idioms or jokes. It has been described as ‘decaffeinated English’ or ‘English Lite’ and is promoted by a former IBM executive, Jean-Paul Nerriere, who wrote a book called ‘Parlez Globish’

He had noticed that in international business meetings, non-native speakers of English were using a simplified form of the language to communicate with each other – and actually preferred not to speak with native English speakers, who tend to overcomplicate things.

An article in The Australian newspaper put it like this:

Their florid phraseology and grammatical complexities are often incomprehensible, said Nerriere, who added: “One thing you never do in Globish is tell a joke.”

So – no need to worry about Globish taking over anytime soon. But it might force us to

Some people worry about the way that English is changing. The Queens’ English Society (motto: good English matters) has even set up an Academy for English to protect it from ‘declining standards’. However, it is doomed to fail. English has always changed and evolved, soaking up words and phrases from other languages and is the richer for it.

Given the numbers of Chinese people learning English, my guess is that we’ll benefit from new expressions coming from ‘Chinglish’. From Chinese English Pidgin we already have ‘long time no see’, ‘look-see’, ‘lose face’, ‘no go’, and ‘no can do’.

As Oliver Ludz Radtke says in his little book ‘Chinglish: found in translation’: “…the English-speaking traveller more frequently encounters Chinglish in the form of public signs rather than spoken oddities.” He aims to show the creative side of Chinglish – a product of Chinese grammar and the English dictionary.

And creative it certainly is.  Where we would have a sign simply saying ‘Keep off the grass’, in China you might see: 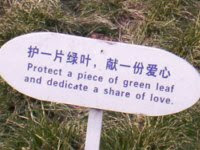 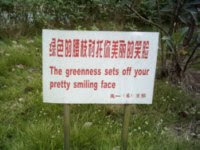 Makes you stop and think, then smile.